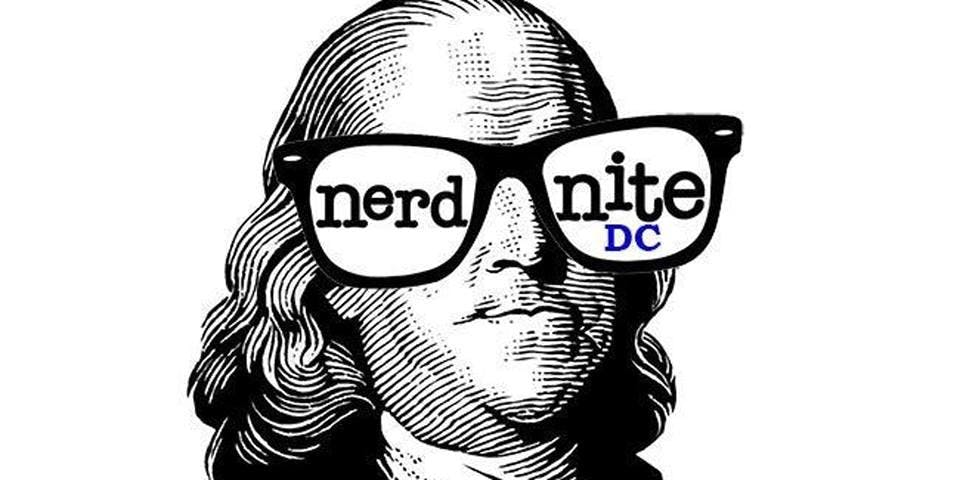 We will be brodcasting NERD NITE on the first floor TVs with sound. You can watch it for FREE.

"Battle of the Sexes: the Surprising Complicated Sex Lives of Animals" by Sara Nemati

Summary: Mating isn't easy in the animal kingdom! Males want to spread their seeds, females want good dads with strong genes. But there's more to the story. From curly duck penises to sperm scoopers to flatworm penis fencing, all is fair in love and war. Learn about the surprisingly complicated sex lives of the animal kingdom and how the battle of the sexes still rages on today.

Bio: Sara Nemati is a biology teacher at Montgomery County Public Schools and likes to nerd out on science books on the side. You may remember her from the 10 Weirdest Mammals. Fun fact about me: I have a Jack Russell terrier mix that knows over a dozen tricks.

"How to lose a girl in two standard deviations - an analysis of women in STEM roles in romantic comedies," by Veronica Carlan

Summary: Ever thought about how women are often portrayed in roles that are less technical than men? Especially leading ladies? Especially in movies targeting female audiences, like rom-coms? In this talk, we will learn about the basic structure for a rom-com, see a statistical analysis of women being disproportionately represented in non-STEM roles in rom-coms, and learn how Hollywood (are you listening, Spielberg?) could change the recipe to incorporate more diversified and technical roles for women.

Bio: Veronica is a math and statistics professor at Northern Virginia Community College, as well as a part-time data scientist at Elder Research. (So it's pretty safe to call her a nerd.) When she's not sculpting the minds of America's youth, she can be found with her main man, Bongo the Shepherd, on some of Virginia's best trails.

"Fertile and flirty: Menstrual cycle influences on behavior (or how, if for some forsaken reason you're using the rhythm method, you're your own worst enemy)" by Liz Necka

Summary: Despite what your friend who got pregnant in high school said, it is incredibly rare to conceive from a single act of sex alone. So rare that, without intervention, it'd be hard to keep up reproduction at a rate sufficient to continue the species. Enter evolutionary forces: animals have evolved to behave and appear in ways that make it more likely that they'll get their freak on at the right (wrong??) time. But these forces are in play even when our own goals are not in line with our biological imperative to reproduce, and when we're engaging in behavior that can't directly do anything to advance our species. In this talk, we'll explore these behavioral adaptations in humans and other animals, how they affect our social world, and importantly (if you have ovaries or are person who has sex with someone with ovaries), how to keep yourself in check (or lean in) when your body really wants to fulfill its duty to the human race.

Bio: Liz is a social neuroscientist from the University of Chicago who studies how biology shapes (and is shaped by) how we perceive, behave towards, and react to other individuals. She's a social and behavioral science advocate, a science policy enthusiast, and a AAAS Science and Technology Policy Fellow. Outside of work, Liz can be found lindy hopping, nerdy-gaming, or hiking with her 120 lb dog. Her current project is trying to convince her husband that ferrets are cute and that she should have one in their home.