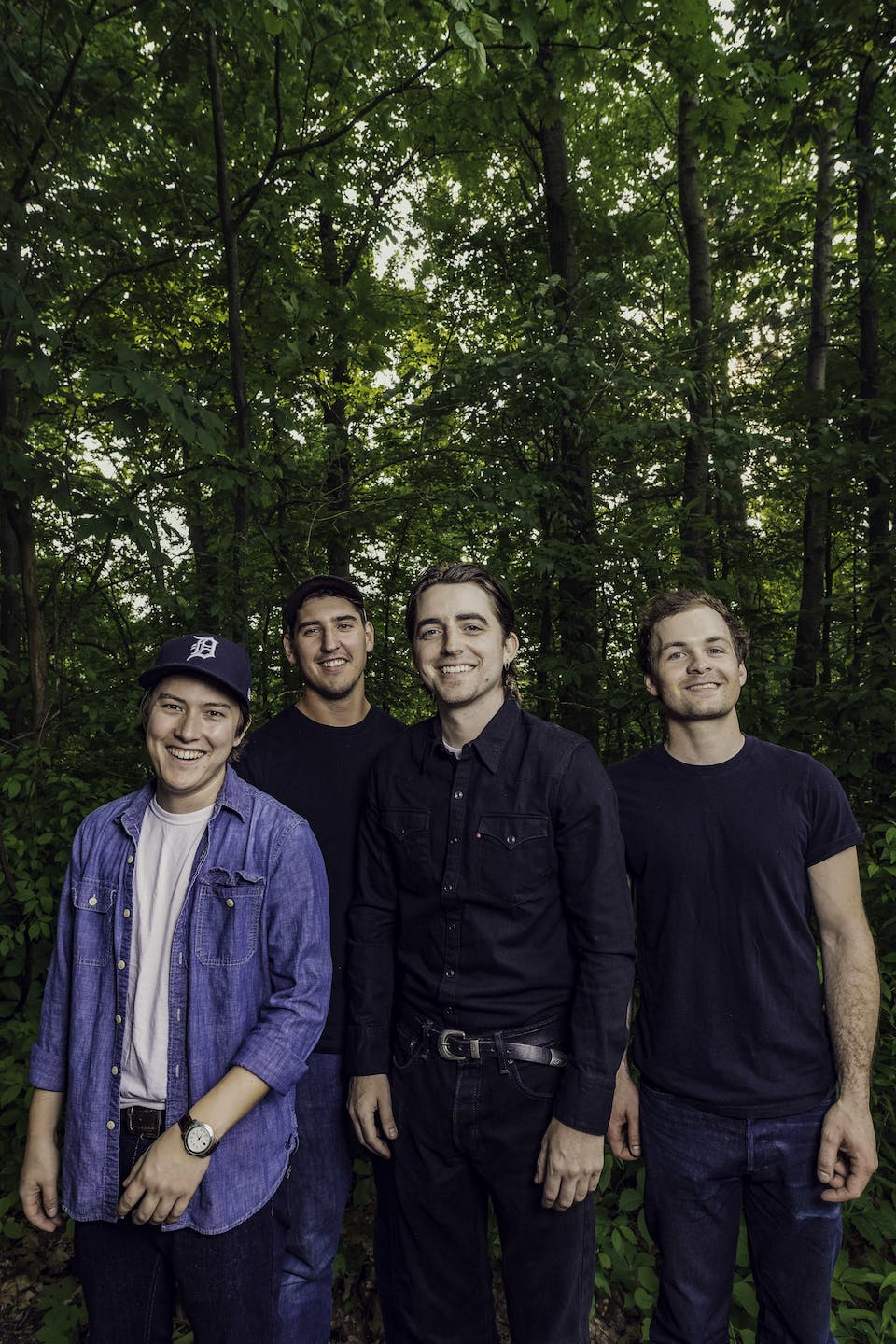 Lifelong friends and deep-north natives, Michigan Rattlers play heavy-hearted folk-rock with an aching dose of Midwestern nice. Graham Young (lead vocals/guitar), Adam Reed (vocals/upright bass), Christian Wilder (vocals/piano) and Tony Audia (drums) began writing music and performing together in their Northern Michigan high school. They regularly played every bar, cafe, and stage in town, developing a musical chemistry informed by the likes of AC/DC, Creedence Clearwater Revival, Bob Seger, and more. After a few years apart, Reed and Young settled down in Los Angeles, recorded a short demo, and began playing locally. The demo found its way in the hands of super-producer Johnny K, and they cut the bulk of their first EP at NRG studios in just one day. This self-titled Michigan Rattlers EP attracted glowing reviews from No Depression, Bluegrass Situation, Relix, Glide, Grammy.com and more. Rolling Stone named the band one of their “Ten New Country Artists You Need To Know.” In 2018, following a massive summer tour that included stops at Bonnaroo, Firefly and Electric Forest; the band released their highly anticipated debut full length album, Evergreen, and added pianist Christian Wilder and drummer Tony Audia to their lineup. The Michigan Rattlers are currently in the studio recording their second full length album in between tour dates.

"I wanted to write a song that wasn’t sad or negative. Don’t get me wrong I love a solid heartbreak tune, but I had never written anything else." admits Brent Cowles,bas he described the impetus for "High to Low", his brand new single available everywhere now.

"I wanted to make people dance and smile" he continued. So Brent locked himself in an LA studio with producer and songwriter Lewis Pesacov, of Fool's Gold fame, and they put together the funky foundations for "High To Low.” Brent and Lewis built the song around the bass-line. The result is exuberant, good time rock n roll. Says Brent, "It’s a song about dancing like everyone is watching, and you don’t give a damn."

Blurring the lines between boisterous rock, R&B, and contemplative folk, Brent’s infectious voice and knack for melody seem to swing effortlessly from quavering intimacy to a soulful roar as they soar atop his exuberant, explosive arrangements.

Growing up, Cowles first discovered the power of his voice singing hymns at his father’s church in Colorado Springs. Having a pastor for a parent meant heavy involvement in religious life, but Cowles never quite seemed to fit in. At 16 he fell in love with secular music; at 17 he recorded his first proper demos in a friend’s basement; at 18 he was married; at 19 he was divorced. Meanwhile, what began as a solo musical project blossomed into the critically acclaimed band You Me & Apollo, which quickly took over his life. The Denver Post raved that the group created “some of the most exciting original music in Colorado,” while Westword proclaimed that their live show was a “clinic in roots rock mixed with old school swing and blues,” and Seattle NPR station KEXP hailed “Cowles’ Otis Redding and Sam Cooke inspired vocals.” The band released two albums and toured nationally before they called it quits and amicably went their separate ways.

The parting was a necessary but difficult one for Cowles. In the ensuing months and years, he would find himself alone more than ever before, at one point living out of his Chevy Tahoe just to make ends meet. But rather than break him, the experience only strengthened his resolve. "High to Low” gives the listener a real sense of Brent’s current mood. His songs are more evolved yet simpler, his lyrics are stronger yet fragile. He hopes you love it, live it and get down with it.